Does the First Amendment to the United States Constitution protect the right to augment reality?

As with most legal questions about augmented reality (or “AR”), we can’t answer definitively, because no court has yet considered the issue.  But with consumer-level digital eyewear just around the corner, we will soon be faced with questions just like this.  So we’d better start thinking about them.

More specifically, the question I want to consider is: can an owner of something tangible (be it real property, goods, billboards, or even a person) stop me from creating an augmented layer associating digital content with that tangible thing?  Commentators have already analyzed this question from the perspective of “virtual property rights.”  But as I’ve written (here and here), I see that phrase as a misnomer. Although AR creates the illusion that digital data occupies physical space, it’s not really there.  Property law is about the right to exclude others from physical space.  But an infinite number of people can each create their own AR layer superimposing digital data over the same physical space without impeding anyone else’s ability to do so, and without invading the rights of the real property owner.  Therefore, property law doesn’t help us think accurately about the AR experience.

Rather, when my digital device recognizes a person, place or thing and is triggered to augment my view of it with digital information, the experience is much more like clicking a hyperlink on a web page–except that the “web page” is the physical world around me, and the hyperlinked “text” is the person, place or thing that triggered the display.  And just as with a web page, there is someone responsible for writing the short piece of link code and for choosing to associate it with that person, place or thing in the program being run by the digital eyewear.   I want to consider the possibility that this coder’s choice to associate digital content with a tangible object is itself speech protected by the First Amendment‘s prohibition of laws that “abridg[e] … the freedom of speech, or of the press.”

We can get a sense of how courts will answer this question by thinking like judges do–in analogies.  When courts encounter unique factual circumstances (what they call “cases of first impression”), they draw from cases dealing with the most analogous facts they can find.  As I’ve suggested, the best way to understand the three-dimensional “clickable world” is by analogy to the two-dimensional World Wide Web we interact with every day.

The United States Supreme Court has long recognized the Internet as a “dynamic, multifaceted of communication.”  Its 1997 decision Reno v. ACLU struck down part of the Communications Decency Act of 1996 for infringing online free speech rights.  The Court drew its own analogy to underscore the importance of online speech when it observed that, online, “any person … can become a town crier with a voice that resonates farther than it could from any soapbox.  Through the use of Web pages, mail exploders, and newsgroups, the same individual can become a pamphleteer.”  Soapboxes and pamphlets are historic forms of political expression that were sacrosanct to those who wrote the First Amendment.  The Court’s use of these analogies  conveyed its conviction that there digital speech should receive just as much protection as any form of communication.

Hyperlinks are a key mechanism by which Internet users convey information.  Where an activist 250 years ago would have stood at the street corner handing out written pamphlets, today’s activist conveys his message by posting a tweet containing a hyperlink to a page with more information. By pointing internet users to another publication, a hyperlink says, “look here for evidence that supports what I’m saying.”  It is little wonder, then, that people have long viewed hyperlinks as key tools for expression.  Tim Berners-Lee, the father of the Internet, said it best in 1997: “[t]he ability to refer to a document (or a person or any thing else) is in general a fundamental right of free speech to the same extent that speech is free. Making the reference with a hypertext link is more efficient but changes nothing else.”

The form of augmented reality I’m considering in this article–in which viewing certain people, places or things triggers the display of pre-determined digital content–is little more than a system of three-dimensional hyperlinks–the World Wide Web stretched into genuinely worldwide webbing.  How a user will “click” on these links will vary.  Today’s smartphone-based AR apps often use QR codes as the physical “markers” that trigger the automatic display of digital content.  Google recently made news by obtaining a patent describing a method for doing something similar through AR eyewear.  One example given in that patent was a QR code that presented the user with an option to do something  when he viewed the QR code through AR eyewear.  But the same patent also posits doing the same thing by looking at pre-determined physical objects such as a refrigerator.  Even today’s AR technology no longer relies solely on QR codes; “markerless AR” looks for any pre-programmed shape or pattern and displays the appropriate digital content when it recognizes the object.  Visions of an AR-infused world have long included scenes in which one can walk down the street wearing AR eyewear and seeing digital objects blended into the real world just by looking around.

Exactly like with two-dimensional hyperlinks, however, what a user sees through her AR eyewear when looking at a physical “trigger” depends entirely on the coder’s choice of digital information with which to “link” it.  In most conceivable circumstances, that choice will involve some level of expressive “speech”–especially because the person writing the code can choose from literally any content in the world when making that connection.  In many, if not most instances, the coder will intend to communicate some sort of message through his choice of digital content and in his choice of who or what to associate that content with.  For example, as part of their 2011 Re+Public collaboration, the Heavy Projects and the PublicAdCampaign used AR to “filter” outdoor advertising and replace it with original street art.  Looking through an AR app, outdoor commercial advertisements were overlaid with political or artistic messages.  One such pointed message caused the image of “Captain Barbossa” in the poster for Pirates of the Caribbean 4 to morph before a user’s eyes into the face of Goldman Sachs CEO Lloyd Blankfein–conveying the artist’s message that he is the “real pirate.”  Similar projects have superimposed digital content onto public murals in a form of augmented graffiti.  Unlike traditional graffiti, however, the art did nothing to impinge upon the “property” rights of those who owned the physical surfaces, and any other artist could come along and “link” entirely different content to the same physical space, viewable through a different app. 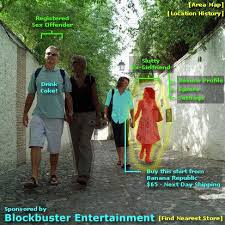 But this is why the courts have never applied the First Amendment’s command that there be “no law” abridging the freedom of speech in an absolutely literal way.  The law has continued to regulate expressive activity that goes beyond the bounds of what we recognize as “free speech,” including defamation, false advertising, criminal conspiracy, and infringement of intellectual property rights.  The same legal boundaries that have governed speech in pamphlets and Twitter feeds will continue to apply in the augmented space.

So to answer the question of whether the First Amendment will protect the right to augment reality, the answer must be “yes–to the same extent that it protects speech in any other format.”  In order to make sure we use the right legal principles and afford the proper level of protection to augmented content, however, it will be important to think clearly about that content and recognize it for what it is: speech.