This could finally be the year that the public begins to see augmented reality as a serious, important technology.   Lance Ulanoff, the editor-in-chief at Mashable, certainly thinks so.  He listed AR as the first of “5 Tech Trends to Watch in 2012.”  “Trust me,” he wrote, “by 2013, you’ll be hard-pressed to find anyone who hasn’t at least tried augmented reality.”  On January 2, 2012, BBC News wrote that “augmented reality …  is beginning to take hold in the US.”

1.  The First Licensing Model for AR content.  Copyright law will always play a big role in AR publishing.  It is the law of creative expression, and AR is a medium through which some of the most creative content of our generation will be expressed.  In other media, those who author creative content give licenses (i.e., permission) for others to reproduce, distribute, alter, publicly display, or publicly perform that content–sometimes for free, sometimes in exchange for money.  AR publishing will work the same way.

Daqri has already announced its plans to be “the YouTube of AR,” where anyone can upload or download user-generated AR content for free.  Sometime in 2012, I expect to see at least one company monetize AR content–perhaps through an in-app purchasing feature, allowing users to download custom images that they could then see through their smartphones.

Personally, I’d love for Apple to offer downloadable AR skins for its Siri personal assistant.  That way, you could not only hear Siri give you directions, but actually see her (through your iPhone) pointing them out right in front of you.  (And you know that Apple will give her an entire digital body, but only charge you an arm and a leg.)

2.  The First Negligence Lawsuit.  “I couldn’t see that wet spot on the floor because the digital, two-headed dragon was in my way!”  I’ve already blogged about the risk that mobile AR users will become distracted by digital content and injure themselves on very physical objects.  As AR gaming, scavenger hunts, and the like take off in popularity this year, I see the first personal injury lawsuit being filed sooner than most people might think.  And the first augmented commercial for personal injury lawyers can’t be far behind. 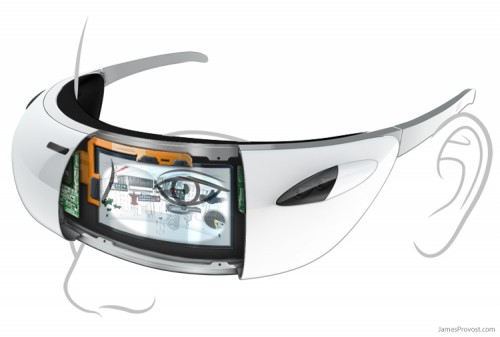 3.  The Introduction of AR Eyewear Starts the First AR Patent Fight.  It might not happen exactly that way.  But two things seem to me not only inevitable, but imminent.  One is  physical eyewear with AR capabilities.  The other is a series of patent infringement lawsuits over AR technologies that rival the patent wars already underway throughout the mobile industry.  It seems only logical that such an innovative, ground-breaking, and immensely popular device would be the most likely to catch the attention of the patent trolls.

4.  The First Trademark Opposition.  There are only so many different ways to say “augmented,” “immersive,” and the other adjectives that suggest AR.  Many startups are not yet thinking about protecting their trademark rights.  They may be surprised when they apply to register their name, only to be accused by another company of coming too close to their own trademark.  That happens daily in other industries, and is likely to happen to an AR company soon.

We may not see all of these events in 2012, but I’d bet that most of them will come to pass.  And I’m sure that we’ll see others that aren’t listed here.  I’ll revisit this post in December to evaluate my predictions.

Question:  Did I miss any?  What legal firsts do you think the AR industry will see this year?